skip to main | skip to sidebar

INTRODUCTION:
Sitting upright. Walking. Running. Bending. Stretching. Staying warm. Distributing oxygen. From the simple to the complex, each of these activities requires muscle action. At the core of muscle action are two protein filaments, actin and myosin. Initiation starts in the nervous system and the signal to contract is trasmitted from a motor neuron to a muscle fiber by a neurotransmitter, acetylcholine (ACh). Once ACh diffuses accross the synaptic cleft and binds to receptors in the sarcolemma, an impulse is generated that spreads down into the T tubues to the sarcoplasmic reticulum (SR). This releases calcium ions from the SR, and contraction of the sarcomere is initiated.

The purpose of this lab is to understand how and why temperature and fatigue effect muscle action.

MATERIALS AND METHODS:
Here are pictures of how I performed each part of the lab.

To test the effect of temperature on muscle action, I submerged my hand in ice cold water for one minute (which hurt very bad, I must add!!). 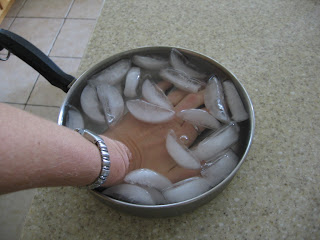 To test the effect of fatigue on muscle action, I squeezed the green ball. 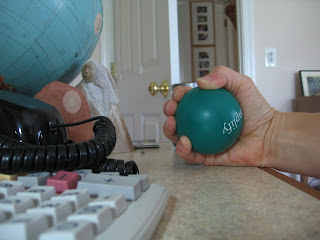 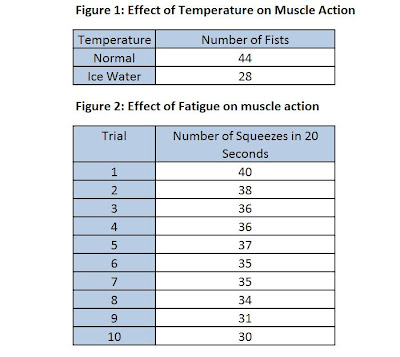 2. What effect did the cold temperature have on the action of your hand muscles? Explain.
After submersing my hand in cold water for one minute, I could hardly make a fist. The muscles felt slow and sluggish; it actually hurt a little. It was like the movement of my hand was not working as fast as my brain wanted it to.

3. What effect did fatigue have on the action of your hand muscles? Explain.
By the end of the first set, the speed at which I could contract started to slow down. The squeeze itself also felt alot weaker. The action slowed because my hand started to ache and cramp.

PROBLEMS WITH DATA OR TECHNIQUE:
You will notice in my data for the fatigue trials, that the number of repetitions in the fourth trial was the same as the third trial and that the number of repetitions increased in the 5 trial. This can be explained by the fact that after the fifth trial I realized that my squeezes had gotten very weak. In the sixth trial I concentrated on trying to apply the same force as the squeezes that I performed in the first trial, and noticed that it did take longer compared to when I was not concentrating as much (in the 4th and 5th trials).

I was also using as online counter to time the 20 seconds and I had to reset after each trial. This allowed some time for rest in between each trial.

CONCLUSION:
This lab showed that both temperature and fatigue impact muscle performance. After my hand was submerged in ice cold water, the movement of hand was very slow and sluggish. Similarly, after each set (and after each repetition) the movement of my hand also slowed.

In both instances, the muscles are being asked to work at sub-optimal levels. In cold temperatures, blood vessels and capillaries restrict, reducing the amount of blood flow to the area. With less oxygen being delivered to the area, production of ATP will be slowed. Without plentiful ATP, it will take longer for all of the myosin heads to return to the resting position, increasing the amount of time between power strokes. Diffusion of the ACh across the synaptic cleft probably takes longer and relase of the calcium ions takes more time as well.

The cause of the slowed action while squeezing the ball is most likely due to the buildup of lactic acid. It is toxic to cells and caused the cramping and aching that I felt. The cramping when away once I stopped squeezing and enough oxygen was delivered to the area to allow breakdown of the lactate to pyruvate.

For a visual representation of how a sarcomere contracts, I went to our book. I really like Figure 12.5. It shows the structure of a muscle fiber, and it also shows the sarcomere, in the relaxed position and in the contracted position. 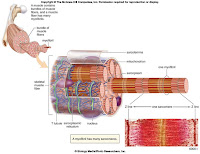 The source of this image is the text for our class:
Mader, Syliva S. Human Biology. New York, NY: McGraw-Hill (2008).
The digital image was downloaded from the power point presentation for Chapter 12 on the Aris website.

This image illustration shows the specific action of actin and myosin. 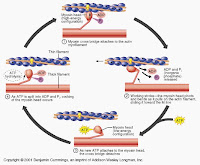 This image was taken from the Owensboro Community & Technical College's Anatomy and Physiology I notes page.

Information in the introduction and conclusion was taken from our textbook:
Mader, Syliva S. Human Biology. New York, NY: McGraw-Hill (2008).
Posted by Sara at 2:53 PM


Thanks for sharing your article and for giving us the chance to read it. It is very helpful and encouraging. Visit my site too.

The Journey to Truth said...

Thank you. This article was very helpful.

Thank you so much for sharing. So informative.

You might get some help from WritePaper.Info Success and best regards! 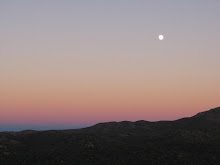 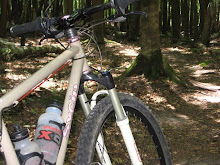 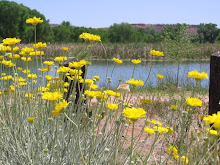 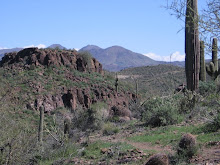 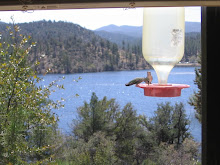 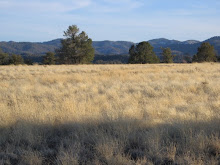 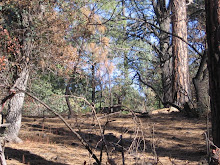 Sara
Arizona transplant from Plainfield, Illinois. I like to bike.